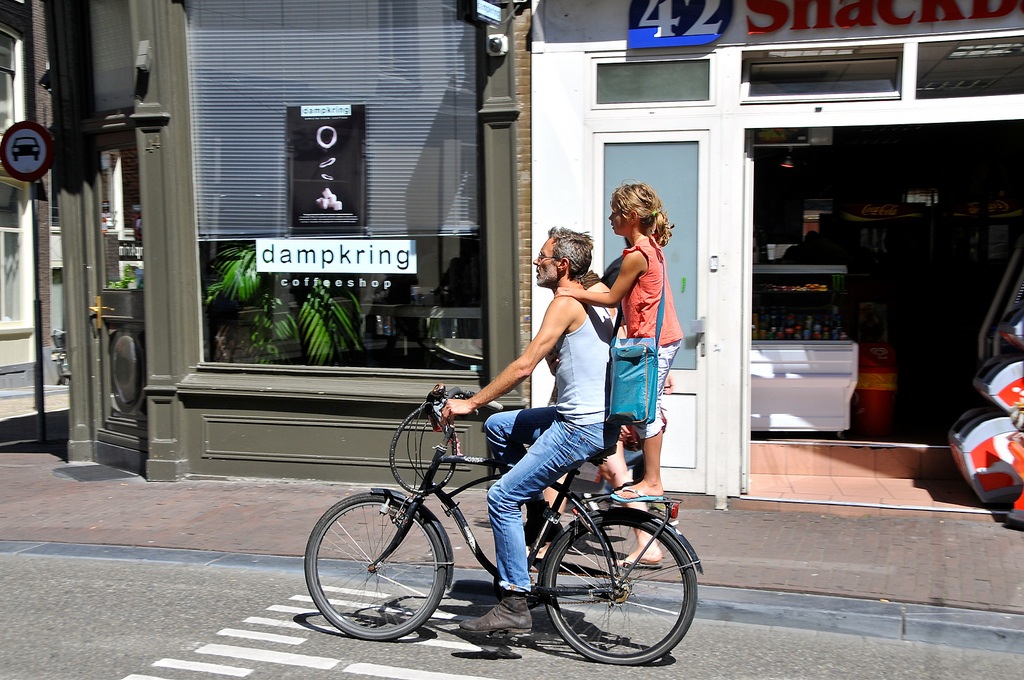 Cycling in Amsterdam? The bicycle is an easy way of transport in Amsterdam. Amsterdammers go to work, to school or the grocery market by bike. It’s safe to say that almost everybody in Amsterdam (and The Netherlands) is able to cycle. Through our long history of cycling a few different cycling types developed… We’ll give you an insight in some of the cycling types you’ll encounter in Amsterdam.

Father cycling with kid in Amsterdam

A father cycling through Amsterdam with a kid standing on the luggage carrier. You won’t encounter the scene on the picture very quickly, but it’s possible in The Netherlands. Wondering why they arn’t wearing any helmets? There are many different reasons why the Dutch don’t wear helmets while bycicling. Some reasons are: The Dutch don’t like to be told what to do, it’s not the norm, cycling is made pretty easy and safe in The Netherlands (own roads and cyclists mostly have priority over cars) and (some) Dutch cyclists don’t feel safer with a helmet, because it isn’t proven that the skull itself is protected and your view is restricted. If somebody is wearing a helmet, it’s probably a tourist. There are alot of pros and cons, eventually you have to decide if you want to wear a helmet or not.

Another stereotype about women! Yes, ofcours you’ll also see the Bakfietsvader or Cargo Bike Father. The bakfiets is a bicycle combined with a container. It’s mostly used to transport children, you might see some children’s day care groups walking or cycling with big Bakfietsen or Cargo Bikes.

Transporting everything by bike

A bicycle isn’t only to transport yourself, but also for transporting many other things, like groceries and children. Basicly, everything!

The multitasker cyclist is mostly young, listens to music and browsing Instagram while cycling.